Kronospan has increased its OSB manufacturing capacity for the Russian market

Kronospan announced the production of its first OSB boards at its factory in Ufa, Russia.

The successful investment in the extension of the plant will nearly double its production capacity and meet the growing demand for OSB in the building and construction markets across Volga, Siberia, Ural, Central Asia, China, Korea, Japan and South America. The plant will have an annual capacity of 1 000 000 m3 and will produce OSB boards in 4 different formats.

This will also secure both the long-term future of the employees of Kronospan Bashkortostan and the indirect jobs it will provide across the region.

Kronospan’s plant in Ufa, which opened in 2013, is one of the largest factories for particleboards with a capacity of over 1 million cubic meters per year. The company owns the largest continuous press for OSB in the world, with the impressive length of 65 meters. The new production line will foster the export of OSB material and reduce the cost of the material for the end users.

Kronospan remains at the forefront of the European industry with the manufacture of OSB boards in 10 different locations across Europe and Asia. 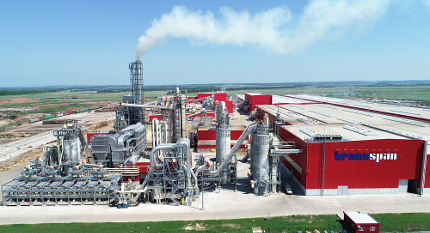