“Let us reforest together” 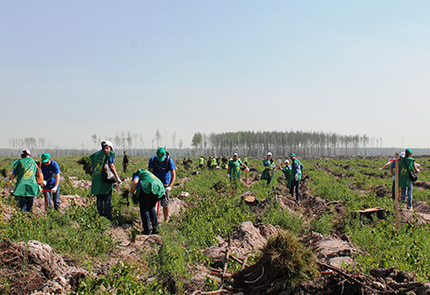 On May 18, 2013 the event ‘Let Us Reforest Together' was held near the village of Plotava, in the District of Pavlovo-Posadsky, Moscow. The event was held as part of Russia's national Plant-A-Forest-Day and participants included members of Russia's national and local governments, as well as workers of the Moscow Region Forestry Committee, volunteers of The Green Patrol, Greenpeace of Russia and other public associations. Representatives of the work collectives of the Moscow Region, such as Kronospan LLC and Kronodrev LLC, also participated in the event.
The total number of participants amounted to 2000 people, who planted more than 100,000 trees in the 25 ha former pine forest that burnt down in 2010.
All those who are concerned about the fate of Russian forests embrace national Russian Plant-A-Forest-Day and volunteer to take part in the activities. Every year, in the region of Moskow alone, millions of trees are planted in places devastated by forest fires, storms, deforestation and the destruction caused by the eight dentated bark beetle.
Particularly in the region of Moskow, Plant-a-Forest-Day has become immensely popular, with local companies, organisations and public bodies getting involved. They plant trees, take care of the growing trees and enjoy watching the new forest grow. It is important to stress that these events are not limited to a single day: The process of planting trees starts during the May Day holidays and finishes at the beginning of summer. During this time, approximately 9,000,000 trees are going to be planted in an area of 2,400 ha.