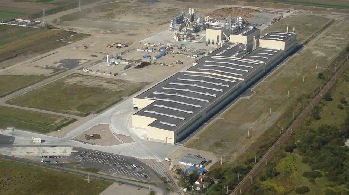 On December 3rd 2009 Kronospan officially opened a state-of-the-art wood-based panel plant in Braşov, Romania. This was an important event for Kronospan, which has managed to undertake such a significant investment despite the global economic downturn.

Kronospan has been in operation for over 100 years and is today the leading manufacturer of medium-density fibreboard, particleboard, OSB and laminated flooring.
Kronospan’s knowledge of the Romanian market for wood-based products is unrivalled and enables it to identify and benefit from the potential in the furniture and construction industries. Kronospan decided to invest in Romania as early as 1999. Work on the Braşov project commenced in 2002 and in 2004 Kronospan purchased a plant in Sebes, which also manufactures wood-based panels.

Kronospan has enjoyed 10 years of success in Romania. Market share has grown as a result of offering a wide array of products, providing exceptional quality, first class service and continuous innovation. This ensures that Kronospan is a reliable partner for all its customers.

Braşov is an area with a huge potential for economic development. Its location in the centre of Romania provides important advantages from a logistics perspective, as goods can be transported efficiently to all regions of the country. Other advantages include a well-educated labour force, the positive attitude of the local authorities with regard to investors and the University of Transylvania (which has a highly respected Wood Industry Faculty).

Kronospan’s investment in Braşov is worth Euro 200 million and includes building the most advanced OSB production facility in Eastern Europe and the only one of its kind in Romania. The production facility is fitted with state-of-the-art technology, has a production output of 350.000 m3 pa and employs 270 people. Following further investments the number of employees should increase to 500. Kronospan has a young, professional team, recruited both from Braşov and the neighbouring regions such as Codlea, Zărneşti, Săcele, Vulcan, Râşnov, Feldioara.

Further benefits of the investment will include the generation of 3000 indirect jobs through partner companies, e.g. suppliers of raw materials, maintenance items, forwarding companies, stationery, cleaning, security and catering companies. For many companies, collaboration with a company the size of Kronospan can ensure their survival especially during tough economic times. Kronospan will also be one of the most important tax payers in the region.

Using its modern, cost-efficient production facility in Braşov, Kronospan manufactures high quality products both for Romania and neighbouring countries including Bulgaria, Ukraine and Turkey. Due to its excellent quality and simple processing, the applications of OSB range from construction to packaging and DIY.  OSB may be used for all applications which have traditionally used plywood or lumber.

In addition to excellent quality and a wide product range Kronospan sees the environment as a key priority. As a result the plant in Braşov is fitted with the most advanced environmental protection available (UTWS filter technology). It is Kronospan's strategy to manage the economic, environmental and social impact of the business, in order to be a positive benefit to the community.

The company takes an active part in the life of the local community, both through direct economic investments and social-educational campaigns. The corporate social responsibility projects of Kronospan are aimed at two main areas: education and environmental protection. Kronospan organised the campaign „Let’s plant the future together!” in partnership with the City Hall of Braşov and the Local Forest Administration Kronstadt. As part of this campaign Kronospan employees planted trees in several locations in the city. Kronospan has also developed long-term partnerships with a number of organisations including the Diaconia Association (a humanitarian organization which promotes support for families and children in need), and AIESEC (an international student organization which helps young people to discover and develop their potential).

Other key partnerships include a partnership with the Wood Industry Faculty at the University of Transylvania and ongoing partnerships with non-government-organizations involved in environmental protection (Nature Protection, Tourism Club and The Edelweiß Association). Together with these organizations Kronospan has organized different events with the aim of trying to draw the attention of the community to the responsibility that each individual has for environmental protection. Each year Kronospan organizes numerous events for children in which pupils from different schools in Braşov take part, such as “The Children Draw the Future at Kronospan”, “Santa Claus from Kronospan” “The Easter Bunny Comes from Kronospan“. As a result Kronospan is at the heart of the local community and a leading light in the development of the region.